Culture is the ideas, social behaviours and traditions or customs of a particular society or group.

Cultural violence occurs when an someone is harmed as a result of practices that are part of her culture or tradition.  In patriarchal societies male violence against women is cultural, it is normalised, it functions as a cause and consequence of inequality between women and men.

In the UK, for April 2014, we could represent cultural violence like this: 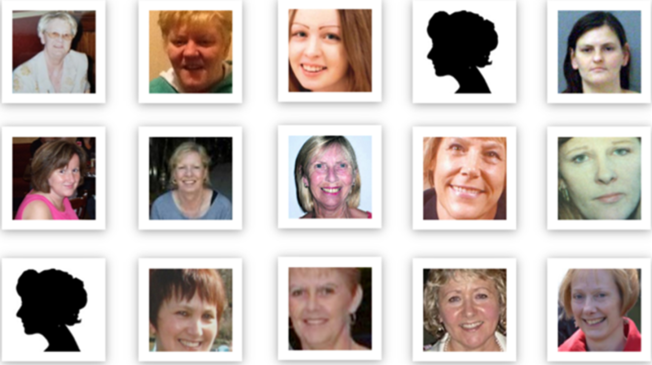 The fifteen women above were all killed in the UK in April 2014. The primary suspects alleged to have killed them are all male.  Fatal male violence against women in the UK is so normalised that only the killing of one of these women made a significant impact on the media.  In the UK, the predominant culture makes fatal male violence against women invisible, it is rarely named as a cultural practice and there is resistance to attempts made to do so.

The woman killed though alleged male violence in the UK in April 2014 were aged between 16 and 75 years old.  Their killers were aged between 15 and 79 years old.  The men who allegedly killed the women made the following choices: One to kill a woman through multiple injuries, one to kill a woman through head injuries, one to strangle a woman, one to decapitate a woman, one to smoother a woman, one to kill her in a house fire or use a house fire to disguise his method of killing and seven to stab women to death  The methods by which two women were killed have not been made publicly available, we don’t yet know about the choices the men made who killed them. At least eight men are alleged to have killed a partner or former partner, one is alleged to have killed one of his teachers and one is alleged to have killed his mother. The relationship between alleged perpetrator and victim has not been released in four cases when men killed women in the UK in April 2014.

In the UK, if asked to describe the term ‘cultural violence’ in relation to April 2014, do we think about these fifteen dead women? If not, we should.