Yesterday afternoon, in Euston, central London, I walked past a small group of women with a banner urging us to “Respect Life”, to say no to abortion, euthanasia and the death penalty. They belonged, as is clear from their banner, to the Sir William Crookes Spiritist Society.  I rejected one of their leaflets (which I now regret) even so they were happy for me to take a photo of them.

Of course I am one of the pro-choice majority when it comes to abortion.  I oppose forced pregnancy, I oppose forced abortion.  Women’s rights must include bodily autonomy and the freedom to choose what is best for them, albeit within the confines of patriarchal society.  Being pro-choice does not mean the same as being pro-abortion.  It does mean   making sure that women are supported, that though promoting and increasing access to contraception we reduce unwanted pregnancies, that through education we ensure that everyone understands how to avoid getting pregnant, as well as how to get pregnant.  Pro-choice means increasing ease of access to legal, early, safe abortion.  Pro-choice means not judging women who have abortion (s). I’ve heard that some infertile women oppose abortion, criticising women who have an abortion as ‘selfish’ when some of us can or could not have a child. I can’t see how reducing another woman’s liberties can ease the difficulty of infertility.   Women should never be reduced to baby-making machines, just as those of us who cannot have babies are no less women.

Pro-choice means believing that every child should be a wanted child, that seemed so clear to me until a few days ago, until I thought about sex-selective abortion as a result of a failure to prosecute two doctors who had carried out abortions on the basis of the sex of the foetus.  I am not comfortable with the position that  ‘a woman’s right to choose’ can be extended to femicide.  Like so often is the case for a radical feminist, the answer lies in ending the inequality between women and men.  The answer here is to change and challenge those beliefs that see a woman as ‘less than’ a man, a girl as ‘less than’ a boy. Until this happens, I remain uncomfortable with sex-selective abortions. I oppose femicide, but a foetus cannot be more important than a woman,  wanting every child to be a wanted child cannot be extended to forced pregnancy.  Being pro-choice is respecting life, it is respecting the lives of women and children.

Euthanasia, assisted suicide and/or the right to die should never become the duty to die for fear of being a burden on others, should never become elder abuse or  neglect.  The costs and difficulties of care  cannot be permitted to become reasons to kill.  It’s clear that strong laws, an ethical legal framework and guidance are necessary.  But being pro-choice and pro-bodily autonomy mean respecting the right to choose to die. Respecting life means respecting the right to die.

The Sir William Crookes Spiritist Society is opposed to the death penalty.  They do not think that the state has the right to murder murderers and violent, repeat sex offenders.  And neither do I.  Neither does the UK government, the death penalty was abolished  for murder in 1965, (in 1973 in Northern Ireland).  It was not finally abolished for high treason, piracy with violence, arson in the royal dockyards or espionage until 1998. According to Amnesty, across the world  21 countries carried out 682 executions (excluding China where figures are not released but are known to be very high) in 2012.   The top five executing countries in the world are China, Iran, Iraq, Saudi Arabia and USA, with Yemen closely behind. I hate violence but the death penalty is no solution.  Though I understand the anger,  the hatred for and the desire to punish those who abuse, rape and kill, the state should not be a killer. It’s illogical to argue that murder  is wrong through murdering.  Statistical evidence does not support that the death penalty deters crime.  In the USA for example, murder rates in states that do not impose the death penalty have remained consistently lower than in states with the death penalty.  It is also used disproportionately against those who face structural discrimination, people from black and minority ethnic groups. Respecting life means that the state should not be sanctioned to kill.

Reports on the inquest into the death – by hanging – of Simone Jabakhanji, 27, bring together two issues that are important to me: male violence against women and infertility.   Simone’s death has been covered in the mainstream British press including  the Daily Mail, The Telegraph, The Sun and The Independent. She was from Lancashire but living in Gambia in August 2011 when she died.

The Independent, The Sun and The Telegraph describe Simone as a bride, the Mail as a newlywed bride.  Actually she wasn’t, she was a woman.  A woman who had been married to a man for a year and a half at the time of her death.  A woman who was a human being worthy of acknowledgement in her own right regardless of her marital status, a woman who does not need to be defined by virtue of her relationship to a man, or indeed any other person.

The Sun refers to Simone as “Row wife” in the title of its piece on her, the Mail refers to her “tempestuous relationship” with husband Mohammed Jabakhanji and the Independent describes how Mrs Jabakhanji had been rowing with her husband ( thus positioning her as the active subject, the instigator and him the passive object, the receiver) .  Most reports also cover that Janice Lally, mother of Simone Jabakhanji, told the inquest that her daughter was frightened of Mohammed Jabakhanji, that she had to give him quiet space for days when he got angry, that this quiet space was preferable to him breaking her legs.  Close friend of Simone, Abigail Stone told the inquest that she had spoken with her friend on the day of her death and had advised her to return to England.  Not one of the sources above used the phrase “domestic violence”, not one of them referred to Simone’s death in the context of “male violence against women and girls”.

The titles of three of the four pieces manage to tell us that Mohammed Jabakhanji was African and place Simone Jabakhanji’s death in the context of her husband’s infertility.  The Sun, winning a rare prize for relative diplomacy, waits until the first paragraph of its piece before raising the issues of either race or infertility.  Positioning  Simone’s death in relation to her husband’s infertility further removes  Mohammed Jabakhanji from the role of abusive perpetrator and closer to that of victim, victim of infertility.  The Mail doesn’t quite let him off the hook, telling us that his infertility was a result of his unhealthy lifestyle, his smoking  cannabis and drinking.  Mohammed Jabakhanji may well have been infertile, but I know of no fertility test that has the ability to identify the cause of infertility as alcohol or smoking.  There is a correlation between heavy drinking and smoking and reduced fertility, but correlation is not causality.  It is worth considering too, that there would probably be far fewer babies born if the relationship were quite so straightforward.

Coroner Simon Jones has been quoted as saying,  “When a death like this happens in this country [the UK], we get police statements, photographs of the scene.  To record a verdict of suicide in the UK, I have to be satisfied to a very high standard of proof that she did what she did intending to end her own life.”

“But we can’t be certain what she did was done with the intention of ending her life. That would be at odds with the conversations she had with family and friends. Similarly there is no evidence to suggest anyone else was involved.”  Simone’s body had been embalmed without an autopsy in Gambia before being repatriated to the UK.  An open verdict was recorded in relation to her death.

Several small studies have demonstrated a link between infertility in women and psychological distress, reporting high rates of anxiety, depression and suicide. There is less research into the impact of male partner infertility on women’s mental health. It is possible that if Simone Jabakhanji killed herself, her husband’s infertility was a factor, possibly even a crucial one in her decision.   However, research from the Women and Equality Unit, has shown a  clear relationship between domestic violence and suicide in women victims: every year in the UK, 500 women who have experienced domestic violence in the last six months, commit suicide.  Despite each of the four articles managing to link Simone’s death to Mohammed’s infertility, not one of them positioned it in relation to domestic violence, into his coercive, controlling and frightening aggression.

Another woman dead, reduced to her status in relation to a man; another man’s violence minimised and overlooked. 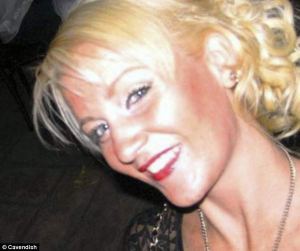