Desmond Tutu has been eulogising about forgiveness, he’s written a soon to be published book about it.  He’s a fan of forgiveness.  He has forgiven his father for his violence towards his mother, violence that Tutu witnessed and was powerless to stop as a child.   He explains that it took him years to realise that he needed to forgive himself, or the child that he was, for not protecting his mother.

Tutu has also, with difficulty he says,  forgiven himself for not making time to respond to his father’s request to see him the night before he unexpectedly died, an occasion which, Tutu imagines, might have been the time when his father sought to apologise for the violence he inflicted on Tutu’s mother.  There’s nothing to suggest that Tutu is correct in this belief.  It’s a convenience upon which he can pin his forgiveness.

It’s probably fair to say that Desmond Tutu is big on religion.  He’s a retired Anglican bishop.   I’d go as far as saying that he appears to have used his power and influence for good, but however closely allied to social justice, religion is conservative, it protects the status quo.  In a feminist analysis that identifies patriarchal society, religion has been shaped to protect men’s oppression of women.

Apparently,  in the bible there are two types of forgiveness: God’s pardoning of the sins of ‘his’ subjects, and the obligation of those subjects to pardon others. Being able to do so is so important that a believer’s eternal destiny is dependent upon it. Refusing to forgive is a sin.  Forgiveness then is a selfish, not a selfless act.  But it’s more than that, when talking about violence, it is an act that absolves the abuser of their responsibility. “No one is born a rapist, or a terrorist.  No one is born full of hatred,” explains Tutu.  He looks at how life chances have an impact upon the person we become, how none of us can say that we would not have behaved as an abuser behaves.  I disagree.  We are more than the product of our experiences.  We have consciousness, we make choices, we can see if our behaviour is harmful or hurtful to another. Abusers are always responsible for their abuse.  If someone’s ‘god’ , or indeed another believer, can absolve someone for the choices that they make, their responsibility is erased.

By reducing male violence against women to an individual relationship, one in which someone who is neither perpetrator nor primary victim can bestow forgiveness, we are ignoring, condoning – forgiving – the wider impact of men’s violence upon women, upon all women above and beyond that individual relationship.  We cannot allow a person to say that this is okay, that this is forgiven, but it appears that religion encourages us to do just that. Indeed, male violence against women can be forgiven by god.  That’s just a little bit convenient for patriarchy. 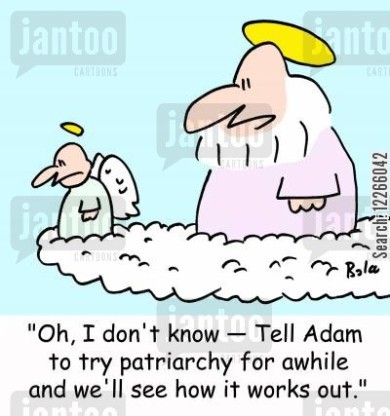