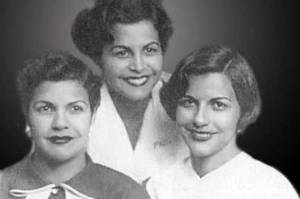 In July 1981, at the first Feminist Conference  for Latin American and Caribbean Women in Bogota, Colombia, 25th November was declared an annual day of protest, the International Day Against Violence Against Women, in memory of three sisters who had been murdered.  Patria, Maria Teresa and Minerva Mirabel were assassinated in a ’car accident’ in the Dominican Republic in 1960. They were political activists, killed for their involvement in efforts to overthrow the fascist government of Rafael Trujillo.  At that first conference, women linked and denounced all forms men’s violence against women from domestic violence, rape and sexual harassment to state violence including torture and abuse of women political prisoners.

On December 17, 1999, the United Nations General Assembly designated 25 November as the International Day for the Elimination of Violence Against Women. The UN invited governments, international organisations and NGOs to organise activities designated to raise public awareness of violence against women on this day.

Increasing though, the 25th November is referred to as White Ribbon Day by the majority of the minority of people actively interested in ending men’s violence against women and girls.  The campaign by men overshadowing, not complementing, the International Day for the Elimination of  Violence Against Women.  Based on a huge assumption about the founders of White Ribbon Day,  one  might be tempted to question the race and sex dynamics at play when a campaign founded by white men eclipses a campaign founded by women of colour.

Sadly, many even fail to take the time to understand even the central them of ‘White Ribbon Day’ as illustrated by an email a colleague of mine received from an organiser of a ‘white ribbon event’ who told her that their day would be ‘for all victims of domestic violence, because men can be victims too’, simultaneously erasing the linking of the different forms of men’s violence against women and the campaign for men to take responsibility for their violence against women.

Men’s violence against women is endemic:

UK media reports of violence against women and girls disproportionately cover violence against white and middle-class women in comparison to those of women of colour and working class women (unless they are sensationalising race and/or other oppressions, such as murders of prostituted women) and I do not want to contribute to this generally or specifically in relation to the erasure of Patria, Maria Teresa and Minerva Mirabel from the history of femicide:  men’s fatal violence against women.

On The International Day for the Elimination of  Violence Against Women this year, I’ll be commemorating the UK women killed through suspected male violence this year on the twitter account @countdeadwomen.  I will start with the 2nd January when Janelle Duncan Bailey, 25 was strangled by ex-boyfriend Jerome McDonald.  Every 10 minutes, I will move on and tweet the next date on which a woman was killed and the name of the women and the man convicted or primary suspect for her killing.  If I start at 6.00 am, and name a women every 10 minutes, I’ll still be naming women at midnight, 18 hours later.