I was honoured to be asked to speak at the Million Women Rise rally. 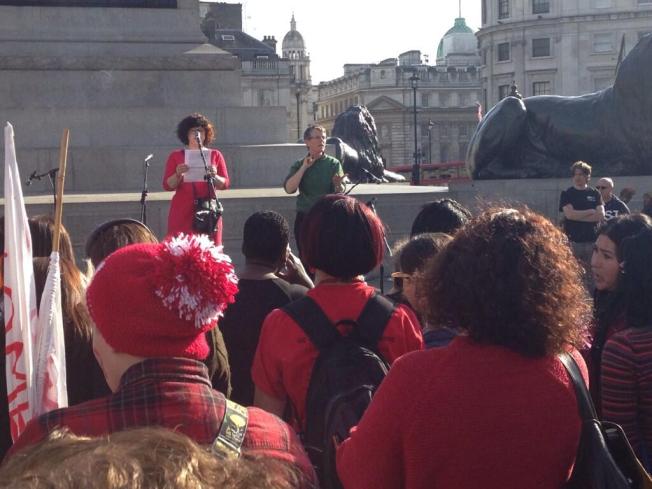 Photo with thanks to Women and Girls Network

One or two folk’ve asked if a transcript  of my speech would be available.  Here it is:

In the first three days of 2012, 7 women in the UK were killed through men’s violence.  Three days: 7 dead women: 3 shot, 1 stabbed, 1 strangled, 1 smothered and one beaten to death through 15 blunt force trauma injuries.

Since then, I’ve been keeping a record of the women in the UK who have been killed through men’s violence.

Most of us here will know the statistic that 2 women a week in England and Wales are killed by a partner or former partner.  It’s too easy for us to say that without  really feeling anything but if we name the women killed and look at their photos, it’s much harder to disconnect.

At first I just counted women killed through domestic violence. Then, a couple of months after I’d started counting, Ahmad Otak stabbed and killed Samantha Sykes, 18 and Kimberley Frank, 17. He wasn’t the boyfriend of either of them, but of Elisa Frank, Kimberley’s sister, so, they wouldn’t be included in those two women a week,  but their murders were absolutely about a man trying to exert power, control and coercion over a woman. Their deaths made it clear to me that concentrating on those two women a week isn’t enough. Only days before the headless and limbless body of Gemma McKluskie had been found in a London canal, her head wasn’t  found until six-months later. Her brother had killed her, chopped her up and tried to hide bits of her body in different places.  Gemma was another dead woman whose murder doesn’t count in the ’two women a week’ statistics.

Through looking at men’s fatal violence against women rather than women killed by a partner or ex-partner I’ve learned other things about women killed by men and the men who kill them.  For example,

In 2012, Delia Hughes was 85 when she was murdered by 25 year-old Jamie Boult who had burgled her.  When Boult was sentenced, Delia’s daughter, Beryl said

“I’ve never seen a dead body before. Seeing my mum her head battered, covered in blood, black and blue with bruises, sitting in a pool of blood, blood splattered on the walls, this is a sight that will stay with me for the rest of my life.”

Jean Farrar, 77, was kicked and stamped on by Daniel Barnett, 20 – another burglar – until she was virtually unrecognisable.  Her  son Jamie was absolutely right when he said

“Daniel Barnett did not need to enter my mother’s house that night. He chose to. Upon finding my mum at home, he easily could have left.  Instead he chose to beat her and throw her against the wall. And when she screamed in pain, he chose to kick her, stamp on her, and jump on her head until she was unable to scream anymore.”

Like Gemma, Samantha and Kimberley, the murders of Delia and Jean were brutal.  The men who killed them made choices to use horrific ugly extreme violence.  If this isn’t sexist or misogynistic, if this isn’t hatred of women, then what is?

According to my records, almost a quarter of women killed though men’s violence are not killed by a partner or former partner.  Can we say that patriarchy – sexism, misogyny and socially constructed gender – did not influence the deaths of those women?  I don’t think so.

I’ve noticed things in media reports: like women are often reduced to their relationship to men or family members: wife, girlfriend, mother, daughter, grandmother; like the deaths of women of colour often receive less media coverage; like, if murdered women have been involved in prostitution or pornography, this can be more prominent in the headline than the fact that a woman was murdered.

One of the things that prompted me to start counting dead women, back in 2012,  was hearing news reports about police describing one of those seven murders in the first three days 2012 as an isolated incident.  Already in 2014, 26 UK women have been killed though alleged male violence, at least 5 of these killings have been described as ‘isolated incidents’.

“This is an isolated incident. This is an incident whereby the victim and suspect did know each other, they were in a previous relationship and I need to assure the communities within Gloucester that it is a safe place to be.”

This isn’t about whether Gloucester is safe, it’s about women.  We – women – are a community and our community is not safe.  Our community of women is being killed by men – and whether we’re killed by our partners or ex-partners, our sons, our muggers, our rapists; whether we’re 22 or 82, whatever our race or religion or lack of religion, whether we’re prostituted women, brain surgeons or shop assistants, we matter and we count, and none of us count more than any other.

Since I’ve been counting dead women, I’ve counted 286 UK women killed though men’s violence.  286 women in 787 days is one woman killed every 2.7 days. And these are not 286 isolated incidents.  Fatal male violence against women is systemic, a cause and consequence of inequality, misogyny, objectification: of patriarchy. When we’re talking about men’s violence against women, there is no such thing as an isolated incident. 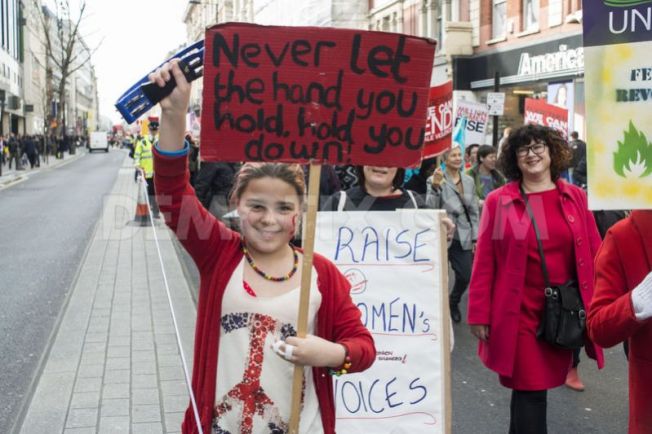